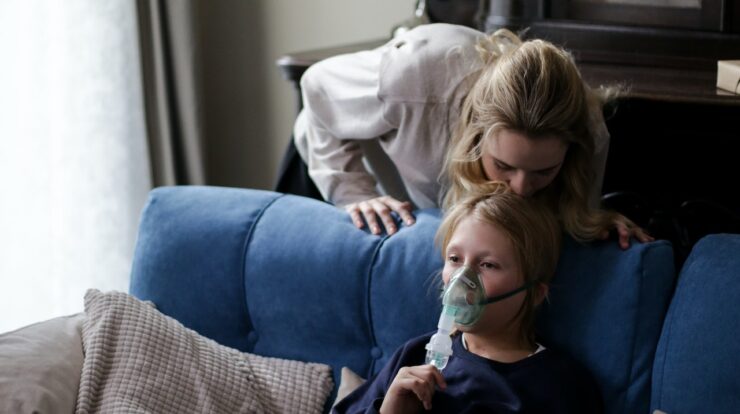 Asthma can strike at any age, half of all cases first occur in children under age 10; in this age group, asthma affects twice as many boys as girls. It is one of the leading causes of respiratory illness among children and young adults, however, this condition may progress a lifetime. It’s estimated 17-million Americans suffer from asthma.

Asthma is a reversible lung disease characterized by obstruction or narrowing of the airways, the lining of the airways . It may resolve spontaneously or with treatment. Its symptoms range from mild wheezing and shortness of breathe (dyspnea) to life-threatening respiratory failure. Symptoms may persist between acute episodes.

People with asthma do not have a problem inhaling, but rather, a problem exhaling. Airways open up during inhalation with the lowering of the diaphragm as the ribs move out making the lungs bigger allowing air to move around any obstruction. However, when the person exhales, as the rib cage relaxes the diaphragm slides up, preventing the air from getting around the obstruction.

Extrinsic asthma results from sensitivity to specific external allergens. In cases in which the allergen isn’t obvious, it’s referred to as intrinsic asthma.

Extrinsic asthma usually begins in childhood and is accompanied by other manifestations of atopy — A hereditary disorder marked by the tendency to develop immediate allergic reactions to substances such as pollen, food, dander, insect venoms, house dust or mold, kapok or feather pillows, food additives containing sulfites, or similar allergic conditions.

In intrinsic asthma, no external allergen can be identified. Most cases are preceded by a severe respiratory infection. Irritants, emotional stress, fatigue, exposure to noxious fumes, changes in temperature, and changes in humidity, may aggravate intrinsic asthma attacks. In many asthmatics, intrinsic and extrinsic asthma coexist.

An asthma attack may begin dramatically, with simultaneous onset of many severe symptoms, or insidiously, with gradually increasing respiratory distress. It typically includes the following signs or symptoms or some conbination of them:

During an acute attack, the cough sounds tight and dry. As the attack subsides, thick mucus is produced (except in young children, who don’t expectorate). Between acute attacks, breath sounds may be normal.

The intensity of breath sounds in symptomatic asthma is typically reduced. A prolonged phase of forced expiration is typical of airflow obstruction. Evidence of lung hyperinflation (use of accessory muscles, for example) is particularly common in children. Acute attacks may be accompanied by tachycardia, tachypnea, and diaphoresis. In severe attacks, the patient may be unable to speak more than a few words without pausing for breath. Cyanosis (a bluish or purplish tinge to the skin and mucous membranes), confusion, and lethargy indicate the onset of respiratory failure.

Treatment of acute asthma aims to decrease inflammation, coughing, wheezing, and shortness of breath, bronchial airway swelling, and increase pulmonary ventilation. After an acute episode, treatment focuses on avoiding or removing precipitating factors, such as environmental allergens or irritants.

If asthma is caused by a particular virus, bacterium, toxin, or other foreign substance, it may be treated by desensitizing the patient through a series of injections of limited amounts of the antigen causing the attack. The aim is to curb the patient’s immune response to the antigen.